Sales is no longer about getting a yes 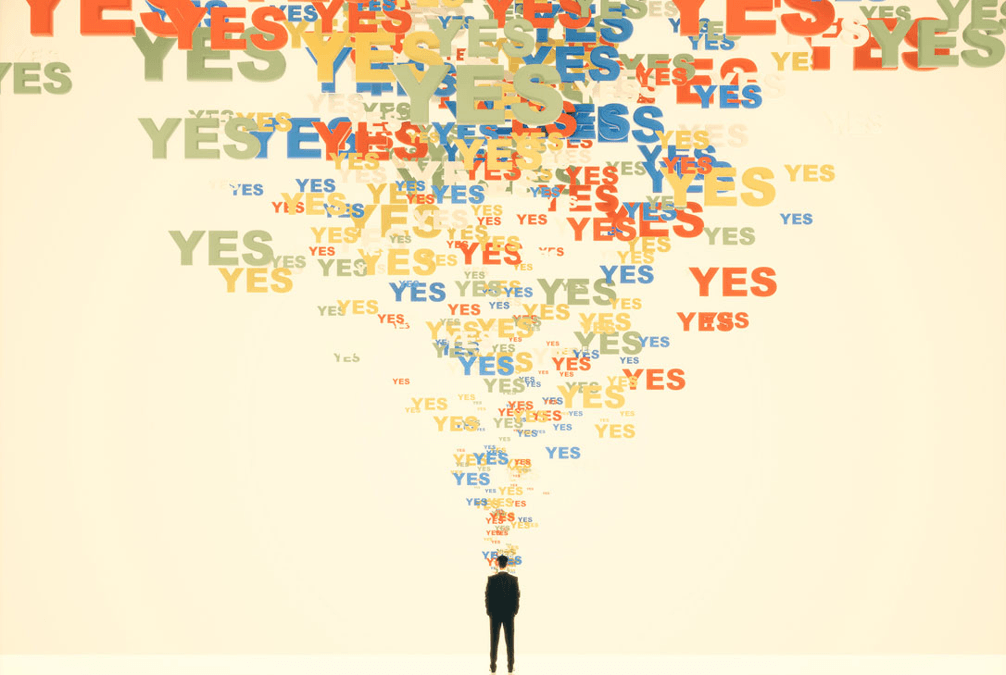 As soon as you require anything in multiples it becomes more complicated, that’s one of the reasons sales has become tougher because many yeses are more challenging than one.

The way that most of us sold in the past was  – find the big cheese, the head honcho, the decision-maker, meet them, educate them, pitch to them, submit proposal, try to close them, they then make a decision, maybe with the support of a sidekick who they’d use to validate their thinking.

If what you sell is a commodity then this can still apply as decisions to buy are made by a couple of people where this is little to differentiate you apart from price and supply.

But for most of us within B2B sales who aren’t in a commoditised market, things have changed dramatically.

Who says so? Everyone that’s who

From research analysts to the troops in the trenches. And the data backs it up as more than half of all forecasted opportunities end up as do nothing deals and more than half of all salespeople fail to make quota. We’re in a performance decline people and we need to do something about it. (If you think that the % of forecasted deals that do nothing is high, I agree. I guess it could be the age-old problem of pipelines being padded with some deals that just weren’t qualified properly, they were never opportunities).

Executives are no longer comfortable making decisions without the wider buy-in of other stakeholders and team members in the organisation. Individuals willing to be fully accountable for decisions that impact the business are rare, accountability is now something that executives and decision-makers like to share.

Think about it, it’s a smart play. If you make a decision on behalf of others without consulting them there’s a good chance there be some resistance and reluctance to fully embrace it. We live in a world where people want to be considered and heard, especially in the business environment. If it’s a decision that impacts and affects others then it makes sense to involve them in what’s best for the wider business.

Consensus-based decision making by committee is now a thing. Decisions are made once consensus is achieved – that’s a lot of yeses.

Many prospects know they have a business problem, they know they need to make a purchase to solve it, the money is there to do it, but they just don’t seem to be able to get to a decision.

Why? It’s not because they can’t make a selection from a vendor, it’s because the people in the buyer committee involved are not aligned.

Getting all of the ducks in a row is complicated, really complicated. Different members of the buyer group have different KPI’s, agenda’s, criteria, concerns and priorities. And let’s not forget about internal politics which is prevalent in every company. Selling is complex and difficult because of us, people. The more of us involved the more complex it becomes, and the research shows that the higher the number in the buyer group the greater the likelihood that it will end in a no-decision.

What is a buyer group and how many are involved? It comprises a mix from across the business, from users through to interested parties and up to executives.  The group includes influencers, and influence is now really powerful, some think it’s even more powerful than authority. Silent and often invisible, but it’s there in every group and cannot be ignored.

One of these influencers is now referred to as the mobilizer, the individual who is driving change and can build consensus with others in the group. This is someone you have to identify and engage with, and if you can get them to become your champion, even better.

The size of the group varies, Gartner states that it’s typically between 6-10 people, but often it’s more. This increase in numbers has contributed to an increase in the length of the buying cycle, with 9, 12 and 18 months now commonplace.

Most salespeople and sales leaders think it’s fewer people in their markets. Who am I to say if they’re right or wrong? The only thing I would add is that the research also showed that only 1 in 5 salespeople identify and engage with everyone in the decision and buying team. So, there’s a good chance that contacts are being missed.

One reason that this could happen is due to the way individuals contribute to the buyer group which comprises of both active and occasional members.

It’s not rocket science to suggest that it’s the occasional members that may be being missed by many salespeople.

Another reason that many salespeople and sales leaders are in the dark about the number of contacts involved is that they get to a position of comfort, they connect and build good relationships with a couple of individuals who they put too much faith and trust in. Just because they like you, just because they give great feedback about your proposition, just because they are key players doesn’t mean you should assume your work is done and you can sit back and enjoy the ride. Too many expected deals are lost this way.

Identifying who the buyer committee members are and engaging with them is only the first hurdle, as difficult as that may be its also the easier of the two main hurdles.

The most difficult part is navigating and managing the buyer team to achieve a collective yes.

Why is it so difficult, even when you’ve got a superior proposition?

Selling involves change management and change normally has both winners and losers within an organisation. Some buyer group members gain from change and others suffer pain. Think about what your offering does, who it helps in an organisation and who it may potentially hinder or impact with additional workload, the need for retraining, loss of responsibility, job insecurity, the list goes on. Business decisions involve people and people will always have some focus on their own best interests which are driven by their own emotions.

Managing complexity requires a complete understanding of both the business problem and the buyer committee, you’re then in a position to help them solve the problem, think solve not sell. A successful outcome is like building a jigsaw puzzle, you need all of the parts in place to achieve it.

What and who do you know about your opportunities?

Do you fully understand the business problem/s your trying to solve including the symptoms, impact, who’s affected and root cause as well as how you help solve them? Don’t try and ram a square peg into a round hole just for a sale or a pipeline entry to fatten up the forecast.

It’s not just about solving a business problem, you also have to help bridge the interests within the buyer group. Opportunity management now includes the need for people management.

People management includes providing highly relevant insights and perspectives that help them at the right time in their process. Don’t add to the clutter factor caused by the excessive amount of content thrown at prospects by different vendors that only adds to the difficulty in reaching a yes.

Don’t just think individual yes from a decision-maker, think yeses across the buyer committee. Of course, this means more work, but nobody said selling was easy.

Much of what we do in sales leads to nothing, either a loss or a no-decision. By making this a strategy you’ll not only help to reduce the number of do-nothing outcomes but also improve your win rates and quota attainment.

Check out our related blog What is Buyer Enablement?